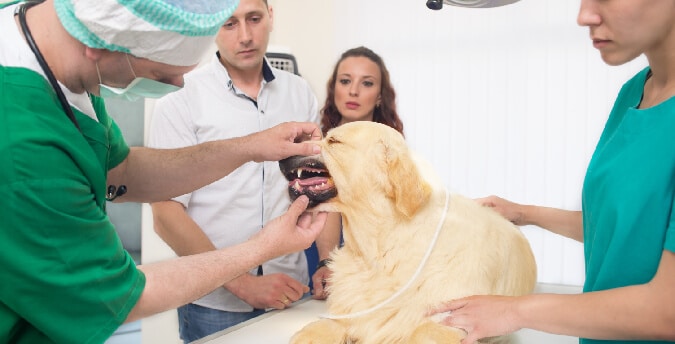 Many non-inherited diseases and conditions could adversely affect a dog’s health. Although some of them can be quite serious, most are preventable with proper care or vaccination.

Canine cancer is a fairly common occurrence, and the effects can be as distressing and as debilitating as when it occurs in humans. In many cases, the only time owners are aware that their dogs have cancer is when a veterinarian examines their pets.

After finding out that your dog has cancer, you might find it necessary to get the opinion of a second veterinarian, preferably an oncologist. Even if the condition is incurable, there are still many ways by which you could improve your dog’s quality of life.

Diabetes is yet another disease that affects humans as well as dogs. The condition results from the lack of insulin hormone in the body or an abnormal response to insulin. Regardless of the reason, diabetes causes a rise in blood sugar levels, a condition known as hypoglycemia. Pups with diabetes should be on a different, special diet to ensure their health. There are specific brands and types of diabetic dog foods on the market.

There is a type of diabetes that is inherited, but most are preventable with the right diet and exercise. Maintaining your dog’s weight could prevent the development of insulin resistance.

One of the most common non-inherited diseases is heartworm infection, which is caused by a parasite that typically settles in the heart and pulmonary system. These worms make their way through the bloodstream, causing damage to the arteries and internal organs along the way. About six months after the onset of infection, the worms settle in the lungs and the heart chamber.

Heartworm infestation is preventable with oral medication in pill form or topical medication. The American Heartworm Society recommends keeping your dog on anti-heartworm medicine throughout the year.

“Kennel cough” refers to concurrent viral and bacterial infections that affect canines’ respiratory systems. A type of bronchitis, the condition results in the inflammation of the canine’s windpipe and voice box. It is comparable to the chest colds that occur in humans.

Kennel cough usually clears up without medical intervention, but it is very contagious. The disease is easily passed on by exposure to the virus, so vaccination is the most effective option for prevention.

Canine parvovirus is a contagious disease that can be life-threatening. The condition can be so severe that veterinarians typically recommend periodic vaccination for all dogs regardless of age.

Dogs should first be vaccinated for parvovirus when they are six to eight weeks old. Booster shots should then be given every four weeks until the puppy is 16 to 20 weeks old, and another when the dog is a year old.

Rabies is a quite common viral disease that could occur in all mammals, including humans. Rabies targets the brain and the spinal cord and is almost always fatal once the symptoms show up.

The good news is that rabies is easily preventable with vaccination. The seriousness of the disease and the ease with which it could be prevented has made rabies vaccination mandatory for pets in many parts of the United States.

Ringworm isn’t actually caused by a worm, but by a fungus. The infection most commonly occurs on the skin, but it could also affect the hair and nails. Ringworm infection is very contagious and could be passed on to other animals, and even humans.

In dogs, ringworm infection usually shows up as hairless patches on the affected area of the skin. Veterinarians typically prescribe shampoos or ointments that will eliminate the fungus, although some may prescribe oral medication. Owners should keep their dogs on the prescribed treatment for as long as the veterinarian recommends. Can I Use Essential Oils on My Dog? Will They Help?