When it comes to meals, one of the most divisive topics going is that of Brussels sprouts. To some, these are an important part of meals that help to make the occasion. They’re healthy, they’re juicy, and they’re very festive.

To others though, brussels sprouts are the worst part about mealtime. They taste bitter, they give you wind, and they’re like a punishment whereas everything else on the plate is a treat.

But how do dogs feel about them? A treat or a nightmare?

The good news is that Brussels sprouts are safe enough for dogs to eat in moderation. They shouldn’t gorge on these, but if you give them small amounts, they can be a great way to provide a number of health benefits.

This is good news to those that don’t like sprouts – it means you can feed them to your pup under the table!

To go into a little more detail, sprouts are related to broccoli and a lot of what is true for that vegetable is also true for sprouts. Both vegetables come from the cruciferous vegetable family and have many of the same benefits like iron, vitamin K, and fiber.

Then again, there are also some downsides to Brussels sprouts for both humans and dogs. Sprouts, as mentioned, already are somewhat known for their tendency to give gas. If you eat too many, then you might find yourself up all night making windy noises, which is something a lot of people consider to be a negative.

That said, while it doesn’t smell particularly pleasant for those around you, it’s actually not unhealthy. In fact, that gas is helping to move the bowels along and clear out your passages – it’s actually good for you!

This is also true for dogs, but only to a certain extent. You see, part of the reason that sprouts cause all that movement is because they’re rich in fiber. Too much fiber is not good for dogs and dogs don’t need as much as humans do. Remember that in the wild dogs would not have eaten much fiber as they are descended from wolves that primarily lived on fresh meat! Raw meat at that.

When you give a dog too much fiber, this can lead to constipation or diarrhea. This is very uncomfortable for them and while it will normally pass, it can also alternatively become a problem if it is very severe.

At the same time, the small amount of sugar in spouts is significantly higher proportionately for dogs. They have a much lower RDV and are much smaller in general, so they shouldn’t consume as much sugar by half!

If you decide to give your dogs Brussels sprouts though, they will still get to benefit from a number of advantages. For starters, sprouts are rich in iron.

Iron is great for dogs and humans alike as it helps to boost their energy levels. If you give a dog iron, it will help to create red blood cells, which in turn carries more oxygen around the body to the muscles, the brain, and the organs.

Iron can help to give your dog more energy, and especially is beneficial for female dogs. Too much iron though can also be a bad thing.

Meanwhile, the large amounts of vitamin K can help to improve cardiovascular health while also strengthening bones. Both these things are very beneficial in general and especially dogs for whom heart and bone problems are common issues. The vitamin also helps to improve blood clotting, which can be useful in the case of an injury.

Vitamins A, B, C, and E meanwhile serve a host of different roles in the body. They will help to improve energy levels, the immune system, skin and hair, and generally all-round health. This can help your dog to enjoy a glossier coat, shinier teeth, and greater energy and healing.

These are the reasons it’s so important to keep feeding your dog a healthy diet. Just like humans, dogs need nutrients in order to maintain optimal health – it is not enough to think about food purely in terms of calories and energy.

HOW TO FEED DOGS BRUSSEL SPROUTS

It is safe to give dogs raw sprouts but for the most part, it is unlikely that they’ll eat them.

To prepare sprouts for your dog, put them in a pan and heat them through in some water. This will kill off bacteria while also softening the sprouts making them much more enjoyable. Humans often enjoy sprouts with bacon or lots of seasoning but dogs don’t need the added calories or spices – just giving them to them plain is a much better move – your dog won’t know the difference anyway!

By Amber Dover
Amber grew up having golden retrievers and will always have a special place in her heart for the breed. Her love for all things "dog" helped her become a general manager at a small kennel in Ohio for several years. Acquainting dogs and understanding both their needs and limitations have given her deep insights into the boarding process many dogs face in their lives. From consistent details to play time to food and bed time, Amber will always remember the small influences she was able to present to every pooch she cared for.
You Might Also Like 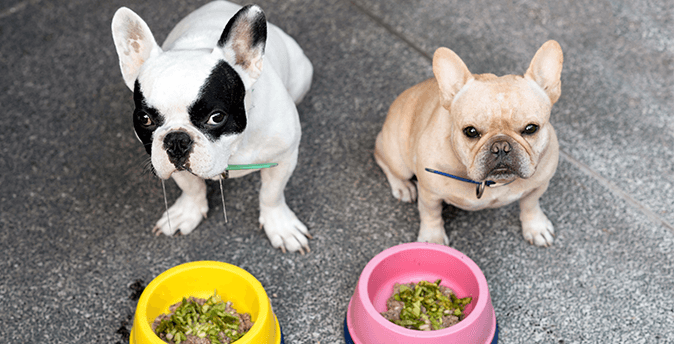